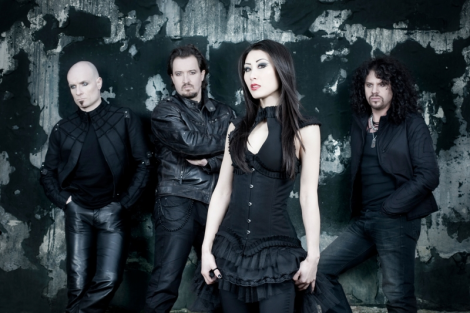 Krypteria is a German gothic/symphonic metal band from Cologne, formed in 2001. The band is fronted by Korean-born Jin-in Cho (vocals, piano),

with Chris Siemons (guitar), Frank Stumvoll (bass) and S.C. Kuschnerus (drums). Cho, who joined the band in 2004, sings in English with only a slight accent. But is it Korean or German? I’m not sure, but I am sure that Ji-in Cho is dead sexy, dressed, in concert, in black-leather pants and a black, sometimes red, corset. Check out their website for a hundred more photos of Cho performing live. Anyway, Krypteria has played many of Europe’s biggest hard rock and heavy metal festivals including Wacken Open Air in Germany (2006 and 2008), Metal Female Voices Festival (2009 and 2010) and Graspop Metal Meeting (2010), both in Belgium, and many others. Now, I’m not a big fan of symphonic metal, even though most bands in that genre are female-fronted, but Krypteria is an exception. Without the symphonic elements, the band sometimes sounds a little like Finland’s HIM, and if Ji-in Cho hooked up with Ville Valo – that would be a dream duet.

Krypteria‘s fourth album, “My Fatal Kiss” (2009), their third with Cho as vocalist, was my introduction to the band, and I was sold by the CD cover art alone! But, then, I listened, and loved the music, too, because the metal guitar riffs overshadow the symphonic elements. The album opens strong with “Ignition,” the first single, which is aptly-titled, for me,

since it was the first song I listened to by this band, and it’s a good one! But “For You I’ll Bring the Devil Down,” the second single, is even better, with its a tale of impassioned devotion: “For you I’ll bring the devil down / For you I’ll set him up and steal his crown / I’ll go to hell and back for you.” And, that devotion is reflected, again, in “Dying To Love”: “Dying to love / My life I shall give / I am dying to love / To finally live again.” But, my favorite is the title track, in which Cho entices her lover: “My fatal kiss / So sweet it is / A taste you’ll never want to miss.” Is she a vampire in this song? I like to think so. In fact, in concert, she looks like a sexy, gothic metal vampire! In “The Freak In Me,” another great track, Cho is afraid to show the one she loves her true self:

I barely can control the way I’m feeling
You’re alone, asleep, I’m here
I’m so close I can almost taste you, I feel you breathe
Got to stay away, got to stay away

Yeah, she’s a vampire who’s afraid she’ll turn her lover. Finally, in the ballad “God I Need Someone,” Cho yearns: “God, I need someone / Just anyone / To save me from what I’ve become.” Van Helsing. He can save her from what’s she’s become. Some have said this album is about man’s “inner demons,” but I say it’s about a woman’s hatred of her vampire heart. Krypteria made a video for “For You I’ll Bring the Devil Down” but you can only watch it on the band’s website. Bastards.

So, to bide my time while waiting a new release, I decided to work backwards on their discography. I started and ended with “Bloodangel’s Cry” (2007), their third (or second) album. “Somebody Save Me,” the first single (whose theme is echoed in “God I Need Someone”), is good. Some reviewer say “Sweet Revenge” sounds like Meat Loaf.

Yeah, maybe, a little. “At the Gates of Retribution” is an epic progressive rocker. Pretty cool. But, my favorite track is the ballad “The Night All Angels Cry.” Cho sings: “Now that I’m done reflecting on my past / For me, no peace at last / Cause I can’t wash my hands of all the bloodshed / All the pain I’ve caused.” Yeah, vampire.

The album released before “Bloodangel’s Cry” was way too symphonic for me, and the one before that didn’t have Cho, or any singer at all, so I waited. Then, in 2011, Krypteria released “All Beauty Must Die.”

Now this is a good album, well worth the wait, but it’s a little bit disappointing, too, when compared to “My Fatal Kiss.” But, only just a little. “Messiah,” like “Ignition” on the previous release, is a strong opening track. “You Killed Me,” the first single, is a tale of love gone wrong with a cool first line: “Down I go, a heart’s been shot, you already left the scene.” The second single, “Live To Fight Another Day,” repeats the Cho’s theme of impassioned devotion, as does “(How Can Something So Good) Hurt So Bad,” an unashamed pop ballad. But, the best track is “Higher” which features Tobias Exxel of power metal band Edguy on lead guitar (but I don’t know him or his band). And, “Victoria” features German hard rocker Doro (I do know her). Watch the video for “Live To Fight Another Day” here: 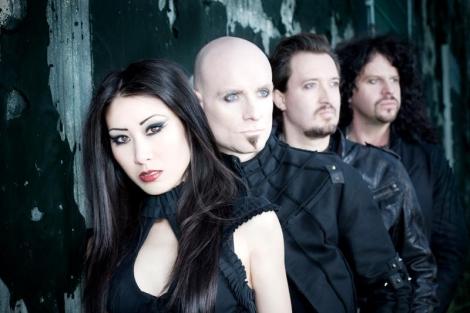 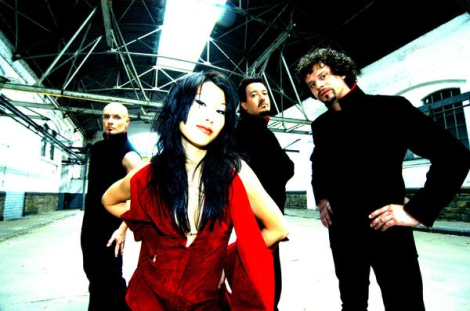