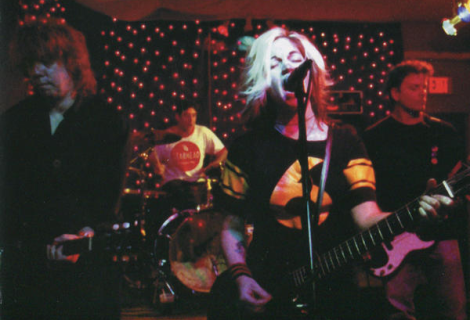 The Downbeat 5 is an American garage rock band from Boston, MA. The band was formed in 1999 by J. J. Rassler (lead guitar) and his then-wife Jen D’Angora (vocals, rhythm guitar). Rassler was formerly in the influential Boston-based garage punk band DMZ, whose sound is echoed in The Downbeat 5 but with female vocals. 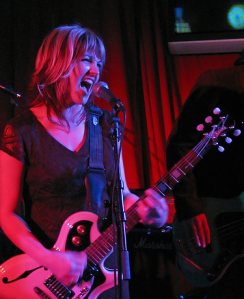 The band’s most obvious inspirations are The Stooges, circa Raw Power (1973) and The Rolling Stones, circa Exile on Main St (1972). But, they also cite ’70s punk and ’60s girl groups as influences, among others. Steven Van Zandt was a big supporter of the band on his radio show Little Steven’s Underground Garage.

The Downbeat 5‘s debut, Ism (2003), is a garage rock masterpiece, as far as I’m concerned. Jen’s snarled vocals recall the late Paula Pierce of The Pandoras, and they kick out 14 retro nuggets in just over 41 minutes. “(I’ve Been) Kicked Around,” “My Way,” “I’m Not Waiting,” “I Found Out” and “Still Don’t Have Her Love” are my favorites, but “Cryin’ In The Night,” “Got It Bad” and “Don’t Come Cryin’ To Me” are cool, too (as are the rest!). The bouncy “I’m Not Waiting,” in particular, is a great track in which randy Jen hates double standards:

Later, she adds: “I don’t mind talkin’ to you / As long as we’re in your bed.” That song will definitely get you on your feet! Love that song, love this album!

The Downbeat 5 followed up, in 2006, with Victory Motel, which was more varied in its influences. “Out In The Streets” recalls that ’60s girl group sound. 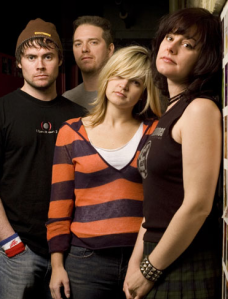 And, “Outcast” sounds a little like Ike & Tina Turner, while “Lonesome Town,” a duet with Rassler, brings to mind Johnny Cash. The album’s good, especially the final track “Lie Again,” but I prefer Ism. The Downbeat 5 also released a live album, Smoke & Mirrors, in 2007, which contained 2 tracks from Ism, 3 from Victory Motel, and other assorted goodies.

Jennifer D’Angora also played in another band with bassist Michelle Paulhus (ex-The Decals) called The Dents and released one album, Time For Biting (2004). D’Angora and Paulhus shared vocals in The Dents and their sound was more pop/punk, even Replacements-esque, but “Not Through With You” is definitely reminiscent of The Downbeat 5. Overall, The Dents were a cool band.

Watch The Downbeat 5 perform “My Way” & “Cryin’ In The Night” live here: