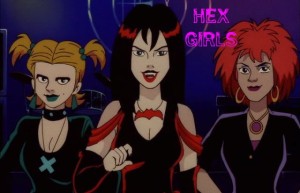 They made only a few appearances, since 1999, but they deserve their own spin-off series, none the less, or better yet, a live-action movie.

So, who are the Hex Girls? Well, obviously, they’re an all-girl rock band of “eco-goths” who, on occasion, help Scooby-Doo and friends solve mysteries. The band is led by sultry Thorn (voiced by Jennifer Hale) on vocals/guitar, with Dusk (voiced by Go-Go Jane Wiedlin) on drums/backing vocals, and Luna (voiced by Kimberly Brooks) on keyboards/backing vocals. What, no bass? I wonder if Jack White loved the Hex Girls too? Anyway, I wanted to muse about the Hex Girls, but, in order to do so, I had to re-visit the band’s career, first-hand,

so I consulted another life-long fan, my 10-year-old daughter Gabrielle, and together we watched a Hex Girls retrospective.

The Hex Girls first appeared in the direct-to-video animated movie Scooby-Doo! and the Witch’s Ghost, released on October 5, 1999. Obviously, my daughter was born after this, but the Scooby-Doo franchise is timeless and, seemingly, endless. In the movie, the Mystery, Inc. gang (Scooby-Doo, Shaggy, Fred, Daphne and Velma) are invited to Oakhaven, MA, by famous horror writer Ben Ravencroft (Tim Curry) to investigate an alleged haunting by the ghost of his ancestor Sarah Ravencroft, who was persecuted as a witch by the town in 1657. The gang stumbles upon the Hex Girls, a local band, rehearsing their signature hit “Hex Girl” for the annual Oakhaven Autumnfest. “I’m a Hex Girl and I’m gonna put a spell on you,” Thorn sings, and seems to do so on Fred, much to Daphne’s dismay. The gang initially mistakes the Hex Girls for real witches, especially after Fred and Daphne watch Thorn perform some sort of ritual. However, the witch is soon revealed to be Mr. McKnight, Thorn’s father.

“Your name is Sally?” Fred wonders, surprised, when her father calls her by her real name. Mr. McKnight, with some other townspeople, orchestrated the hoax to draw tourists to their town. Thorn’s ritual, by the way, was to soothe her vocal chords. Mystery solved. Well, not quite yet. A belt buckle, found by Scooby-Doo, leads the gang to find Sarah Ravencroft’s diary, which Ben hoped would prove her innocence. But, he reveals that the diary is actually Sarah’s spell book in which she was imprisoned by Wiccans, and that he lured the gang to Oakhaven to help him find the book so that he could summon Sarah, which he does, to rule the world together with her. Now, it’s up to Thorn, who revealed that she is part Wiccan, to recite a passage from the book to banish Sarah, and Ben, back into the book. She does, saving the world. In the end, the Hex Girls perform their other hit, “Earth, Wind, Fire, and Air” at the Autmnfest. “Earth, wind, fire, and air,” Thorn sings, then adds, in harmony with Dusk and Luna, “We may look bad but we don’t care.” Both of the Hex Girls songs performed in the movie are sung by the voice actresses (Hale, Wiedlen, Brooks), but “The Witch’s Curse”, which plays over the end credits is sung by three different Hex Girls (Terry Wood, Angie Jaree, Gigi Worth).


The Hex Girls re-appeared in another direct-to-video movie Scooby-Doo! and the Legend of the Vampire, released on March 4, 2003, shortly before Gabrielle was born. In this movie, Scooby-Doo and friends travel to Australia for a much needed vacation. They decide to venture into the Outback for the Vampire Rock Music Festival at, well, Vampire Rock, where they are elated to find that the Hex Girls are the opening act.

They also learn that one of the performers, Matt Marvelous, has disappeared, allegedly at the hands of the legendary Yowie Yahoo, a vampire that lives in Vampire Rock and who also turned one of last year’s bands, Wild Wind, into his three vampire minions. Fred proposes that the gang go under cover as a rock band and the Hex Girls help them with their disguises. Soon, another band, The Bad Omens, is kidnapped by the Yowie Yahoo’s vampire minions, leaving only the duo Two Skinny Dudes and the Mystery, Inc. gang. The next night, during the Hex Girls‘ performance of “Who Do VooDoo”, the Yowie Yahoo’s minions kidnap them too. So the gang ventures into Vampire Rock to rescue the girls. Eventually, they catch the culprits, who turn out to be Two Skinny Dudes and one of the festival’s promoters. But, then it’s revealed that these three are actually the members of the band Wild Wind who are bitter for losing last year’s festival and unable to compete again due to the rules. 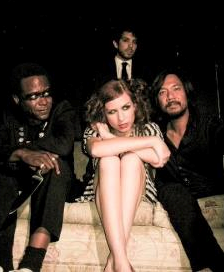 In the end, Scooby and friends, now dubbed The Meddling Kids, perform the classic theme song “Scooby-Doo, Where Are You?” with the Hex Girls on backing vocals. “Who Do VooDoo” is actually sung by Go-Go Jane Wiedlin (Dusk), even though Thorn sings lead in the movie.

Also, on this movie’s soundtrack is a cool pop/punk song called “Getaway Yeah” performed by Holland Greco. Who? Didn’t know, so I looked her up and found an awesome EP called MURDERGRAM: Songs of the MISFITS (2012) which “is an homage to the horror punk songwriting of Glenn Danzig with new arrangements inspired by the cinema of Quentin Tarantino, Robert Rodriguez, and rumbling electric guitar pioneer, Link Wray.” Yeah, it is!


Next, in the ninth incarnation of the cartoon series, What’s New, Scooby-Doo? (2002-2006), the Hex Girls appeared in “The Vampire Strikes Back” (season 2, episode 5), which originally aired on October 18, 2003. In this episode, the Hex Girls, in wedding dresses, are filming a video for their new single

“Petrified Bride” at Fortescu Castle in Transylvania when a vampire crashes the set. Dusk barely gets away and is too scared to continue. When the Mystery, Inc. gang arrives, Velma poses as Thorn, and the culprit, Steve Fortescu, is apprehended and locked in the cellar. However, the attacks continue, but, eventually a second vampire, Stu Fortescu, is captured, revealing that Steve and Stu are twins who want their family’s castle back. In the end, the Hex Girls, in a video, perform the show’s pop/punk theme song, “What’s New, Scooby-Doo?”. Cool. However, the very Ramones-esque “Petrified Bride”, which is also used in the chase scene, is a really cool song. “Wanna wed but I fled (yeah, yeah)!” the girls sing. Awesome!

In the first episode, the Hex Girls, Velma’s favorite band, are performing “Hex Girl” at a concert in Crystal Cove when a mysterious phantom interrupts the show, intending to drive the girls out of the music business. Since the Phantom nearly killed Thorn, Daphne poses as her, singing a slower version of “Earth, Wind, Fire, and Air”. Daphne is kidnapped by the Phantom, but is later recovered, overhearing Fred say “I wish I didn’t care about Daphne!” They argue, and Daphne, as a result, becomes sexy Crush, a temprorary Hex Girl, to catch the Phantom. Thorn and Daphne write a song, “Trap of Love”, for Daphne to get over Fred, and she performs the song in concert. Eventually, the Phantom is caught. He is roadie Daniel Frezette (aka Fantzee Pantz) who blames the girls for ruinng his music career.

Grey DeLisle, the voice actress for Daphne, sings both “Earth, Wind, Fire, and Air” and “Trap of Love”.

The second episode, “Dance of the Dead”, is my favorite of all the Hex Girls‘ appearances. Cursed ska band Rude Boy and the Ska-tastics, who perished in a plane crash 30 years ago, return from the grave in Crystal Cove Cemetery and hypnotize townspeople into skanking to their beat. Fred, Daphne and Velma are affected and it’s up to Scooby-Doo and Shaggy to save the town from ska-zombies. So, they enlist the aid of the Hex Girls, who they find performing “Who Do VooDoo” at a private party on a yacht.

“We’re the Hex Girls! Magic-infused rock is how we roll!” Thorn assures Scooby and Shaggy. The girls confront the zombie ska band in a Scott Pilgrim vs. the World-inspired battle of the bands. Rude Boy and the Ska-tastics perform “Yer Dead Right Mate” while the Hex Girls counter with “Good Bad Girls”. Both songs were written by Dave Wakeling of The English Beat and General Public. He even provides the vocals for Rude Boy. In the end, the zombie ska band is revealed to be the actual band who were one-hit wonders and faked their own deaths to write the perfect song for a comeback. As a side note, original MTV VJ Martha Quinn appears as a cartoon version of herself, owner of the record store, Grooves From the Grave.


And, so ends my journey with my daughter through the career of the Hex Girls!