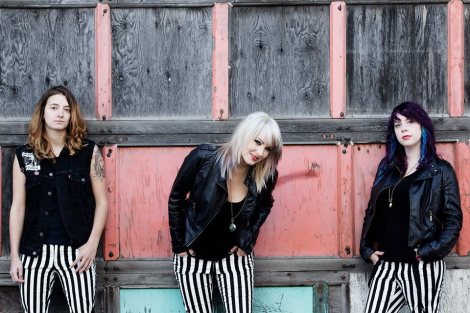 The Anti-Queens (originally The Mittenz) are an all-female Canadian rock/punk/grunge trio from Toronto, Ontario. The band is Emily Bones (lead vocals/guitar), Mary Deth (bass/backup vocals ) and Lindsay Bird (drums). They cite as influences The Distillers,

Hole, The Runaways, and Joan Jett & The Blackhearts. My heart just skipped a beat! They say: “The Anti-Queens have managed to fuse 90’s grungy rock in with a more modern punk tinge. Put it this way: The Runaways who grew up into Veruca Salt, who then became a little more pissed off and morphed into The Distillers.” Take a deep breath, relax. OK, they don’t really sound like The Distillers since The Anti-Queens‘ punk is more pop/rock and Emily’s voice isn’t very gravelly, but they do sound like The Runaways and Joan Jett. 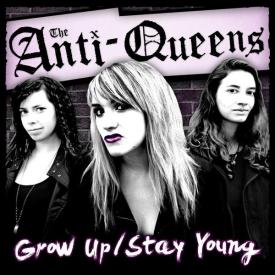 Either way you can’t deny “6 tits with some instruments & a serious DIY ethic.” Their words, not mine! But, yeah, The Anti-Queens are yet another cool new band.

I stumbled upon their current EP Grow Up/Stay Young, released June 30, 2013, on eMusic this week, and I was drawn, at first, to the cover. I listened, liked, then loved this band. The EP opens with the Runaways-ish “L Bomb” in which Emily tackles a dilemma we all face: “The ‘love’ bomb / What do you say back? / What do you say back?”. Cool song! But, my favorite track is Blackhearts-esque “Noushi” (which means “brain death” in Japanese, I think). I love the opening line: “There are certain things I’d love to say to you / But first please have a seat and a narcotic or two.” What does she want to say, you wonder? “You’re C-R-A-Z-Y!” Other cool tracks are the somber acoustic ballad “The Famous Monster” and the punky rocker “Fixerupper”. The latter, which is not about a house, ends with a funny voice mail message from an ex-boyfriend who is seemingly offended by the lyrics.

Watch the video for “Noushi” here:

And, watch a live performance of Joan Jett‘s “Do You Wanna Touch Me” here:

One response to “The Anti-Queens”