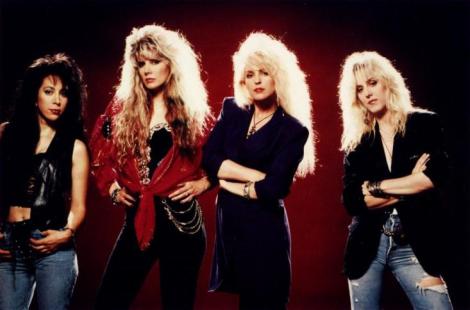 Vixen was an all-female American hard rock/glam metal band, often referred to as “the female Bon Jovi.” OK, first, the facts. Vixen was formed by guitarist Jan Kuehnemund in St. Paul, MN in 1980, but they relocated to Los Angeles a year later. In 1984, an early version of Kuehnemund’s Vixen, with Janet Gardner on vocals, appeared in the sex comedy Hardbodies.

In 1988, after several personnel changes, Vixen was signed to EMI and released two albums with their classic line-up of Janet Gardner (lead vocals, rhythm guitar), Jan Kuehnemund (lead guitar), Share Pedersen (bass), and Roxy Petrucci (drums). They are best known for their hit single “Edge of a Broken Heart”, from their debut album, Vixen (1988). But, when the second album, Rev It Up (1990), didn’t perform as well, EMI dropped them, and the group disbanded due to creative differences. However, in 1997, Roxy Petrucci re-formed Vixen with Janet Gardner, toured [with Gina Stile on lead guitar and Rana Ross on bass], and released a studio album, Tangerine (1988). They disbanded after being sued by Jan Kuehnemund. Then, in 2001, Kuehnemund re-formed Vixen with Gardner and Petrucci, toured [with Pat Holloway on bass], but split-up during the tour. 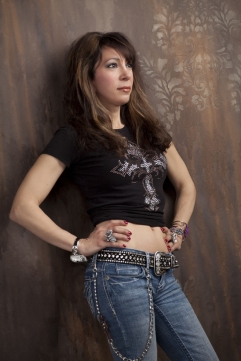 And, that’s the facts.

Now, I’ve always been a casual fan of Vixen but, the other day, I heard “Edge of a Broken Heart” on the radio (which I rarely listen to), and I started to feel a bit nostalgic (which I rarely feel). So, later that night, I decided to look the band up online, but found myself, instead, on drummer Roxy Petrucci‘s website where I found this picture or her and, well, I just about up and fell in love with this woman! Just look at her! She’s 51! She looks amazing! Wait, she can’t possibly be 51 in that picture, can she? Anyway, I started re-listening to Vixen, became a much bigger fan, and decided to do this post.

Vixen, the album, wasn’t revolutionary way back in 1988, but Vixen, the band, was refreshing if you were tired of watching big-haired dudes who looked like chicks. “Edge of a Broken Heart”, which was co-written by singer-songwriter Richard Marx and Fee Waybill (of The Tubes), is a great single, and, when I was a kid, I loved watching Janet Gardner strutting across the stage on MTV in that song’s video. 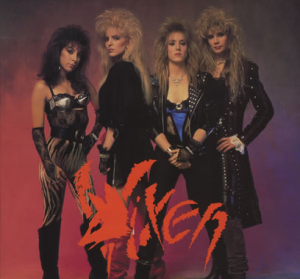 However, despite being tagged a one-hit wonder because of that song, Vixen‘s self-titled debut is better, overall, than just “Edge of a Broken Heart”. In fact, the second single, “Cryin'”, an excellent keyboard-heavy power ballad, is just as good as (or, arguably, even better than) their hit song. And, the third single, “Love Made Me”, is an infectious rocker whose riff reminds me of The Scorpions. But, the Bryan Adams-esque pop/rocker “One Night Alone”, which was written by Gregg Tripp and Jeff Paris (who also wrote “Cryin'” and “Charmed Life”), is a good non-single track. “Desperate”, co-written by Jan Kuehnemund, is a cool track, too. Kuehnemund also co-wrote, with Janet Gardner, “I Want You to Rock Me”, “Waitin'” and “Cruisin'”, all good tracks. Vixen, the album, is an underrated ’80s gem.

Watch the videos for the singles here:

Vixen was a more successful album, and “Edge of a Broken Heart” was an awesome hit single, but Vixen‘s follow-up, Rev It Up (1990), is a way better album, overall. Major labels suck! Ten of the eleven tracks, on Rev It Up, were either written or co-written by the members of the band, and the album rocked harder than Vixen. “Rev It Up” is all the proof you need. Big metal riffs, pounding backbeats, and lyrics that use driving fast cars as a metaphor to “give it all you got.” Awesome! 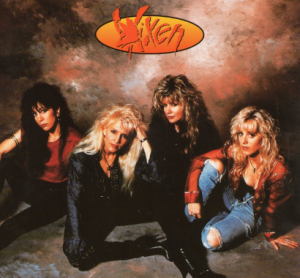 But, the best track is the bewitching power ballad “Love Is a Killer” which, by the way, was co-written by Roxy Petrucci. I would so love to hear Halestorm cover that excellent track! “Love Is a Killer” was the second single from this album. The first single, “How Much Love”, is a great track, too, that will leave no doubt in your mind that this band was the female Bon Jovi, while the third single, “Not a Minute Too Soon”, is another infectious hard rocker. And, “It Wouldn’t Be Love”, which was written by Diane Warren (who wrote Aerosmith‘s “I Don’t Want To Miss A Thing”, and many other hits for other artists), should have been a hit single, but wasn’t even released as such. Elsewhere, “Bad Reputation” is a good track (but I like just about any track by a female artist with that title because I think of Joan Jett‘s classic), as is the very poppy “Only a Heartbeat Away” and the heartfelt “Fallen Hero”. Rev It Up is an underrated ’80s gem – wait, I said that about Vixen, didn’t I? Whatever. Both are gems.

Watch the videos for the singles here:

The first Vixen reunion, in 1997, with Roxy Petrucci and Janet Gardner, resulted in the album Tangerine (1988). All the tracks were written by Gardner and new guitarist Gina Stile, and the album’s grunge/alternative rock sound was as far removed from Vixen‘s signature hard rock/glam metal as it possibly could be. But, here’s the thing … I, unlike most Vixen fans, happen to love this album. Like, a lot. I love the grittier sound, and Gardner’s snotty vocals. But, the only way to truly appreciate this album is to forget that this band

is actually the Vixen you know. If this is the first Vixen album you’ve ever heard, then you’re in luck, but, if not, imagine that these ladies were listening to Alice In Chains instead of Bon Jovi. The first two tracks, “Page” and “Tangerine”, open the disc appropriately with a grungy one-two punch. If you like these two tracks, you will, like me, love the rest of this album. But, try “Barely Breathin'” just to be sure. “Shut Up”, “Machine” and “Can’t Control Myself” are other cool tracks. Give it a shot. By the way, Roxy’s sister Maxine was recruited to play bass on a tour after the release of this album [Michael Pisculli played bass on the recording], but, then, Jan Kuehnemund’s panties got all in a bunch. Currently, Petrucci, Gardner and Stile are active with a new project JSRG, or Janet/Share/Roxy/Gina (pictured). Share is Share Ross (nee Pedersen) of the classic Vixen line-up. JSRG hasn’t released any original music, yet, but I’m waiting, patiently.

The second Vixen reunion, in 2001, with Jan Kuehnemund, Janet Gardner and Roxy Petrucci (pictured above, with Pat Holloway who played bass on tour), didn’t yield an album, but Kuehnemund’s current version of the band (pictured below) did.

Live & Learn (2006), like Tangerine, requires you step back from who you thought Vixen was because this album is not glam metal like classic Vixen, nor is it grunge like their previous incarnation. It’s just rock. However, unlike Tangerine, I do not love this album. Obviously, the problem is that Kuehnemund is the only Vixen member in this band. Jenna Sanz-Agero is a good singer, but Janet Gardner is much better. And, the album is poorly produced, making it sound like a demo. But, still, it’s not without some charm. “Anyway” and “Don’t Want It Anymore” are good songs, for sure, but “Give Me Away” is, by far, my favorite track. If this were some new unsigned band’s first album, I would probably love this, but it’s not – it’s Vixen founding member Jan Kuehnemund’s band and, as such, it’s good, but, ultimately, disappointing. Their next album will be better, I’m sure.

Watch the video for “Give Me Away” here: