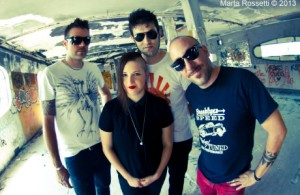 “Honey” is the album’s first video, and, it’s a cool track and all, but, anthemic rocker “Rebound” would have been my choice for the first single [somebody get this song on the radio!], followed up by the power ballad “Heartbreak Warning” as a second single. Other good tracks include “Fade Away”, “More Than This”, and “What Is Mine”. Never Trust is a band to keep an eye on [hey, that’s kind of funny!].

Watch the video for “Honey” here: